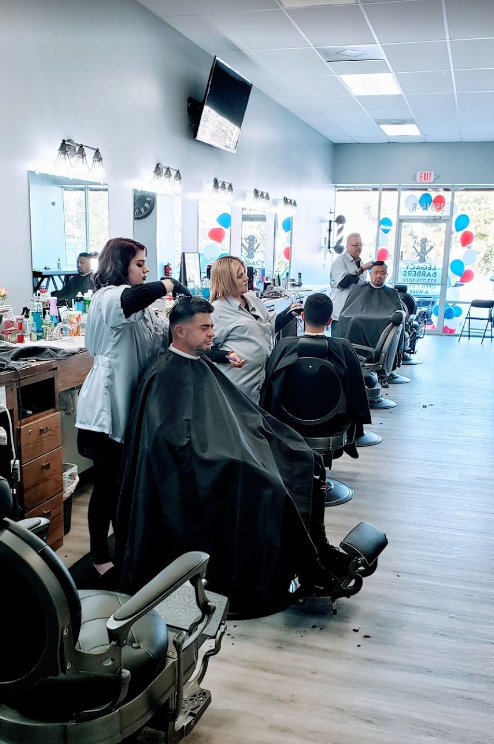 My name is Reginald B. Harris Sr, an I have been a license Barber and Barber Instructor for over 18 years. I started out as a Barber at Box Shop on Laura Koppe in North Houston. I was there over two years Then Texas Barber College called me and offered me an opportunity to become an Instructor through their Instructor program with an offer to work for them once I passed my State exam.

I passed my State Exam and started working for Texas Barber College North Campus and became the Director Of Education / Lead Instructor. I worked for this company for 3 years. I ended resigning from this company in October 2007 to pursue a Career overseas in Bagdad, Iraq with KBR. While in Iraq I was in the Logistical field but I was still filling out my passion by cutting hair in my spare time. I was cutting all different nationalities while there. Which included different country nationals (Sri Lankans, Pakistinies, Iraqis, etc) and along with the Americans that was there.

I was in Baghdad, Iraq for 4.5 years and then I was sent home due to the troops coming home and then I was sent to Kabul, Afghanistan to work for this company name Academi, which was based out of Moyock, North Carolina. I was in Kabul, Afghanistan for 4 years working inside the US Embassy doing Security detail and Logistical procedures. While there I was also cutting hair there in my spare time.

As you see even being away from the Barber field I still managed to pursue my passion to display my talent in cutting hair.

I was promoted to go to Israel, Jerusalem to do Logistical work and I was only there for 8 months and was Injured in 2015. I had to come home due to a major back injury. After being home for 2.5 years I was contacted by a new Barber College in Montgomery, Texas. I have been there working as an Instructor since 2018. Since being there I have had taught some very unique individuals. Some that knew how to cut and a lot that didn't have a clue to even know how to hold the clippers. No matter what level they have come into the school they have preceded to go on and have a successful career in Barbering. With that being said that's where Legacy Barber's come from. They are part of my Legacy since I've had an impact on their lives and they also have an impact on mines. I've never wanted to be an owner of a shop because I've seen and heard all the horror stories of being an owner and I didn't want that headache. Family members have tried to push me in that direction but I pushed back with a NO!!!! Then one day while at work an opportunity fell in my hands that I could not pass up. I prayed about it and I knew the answer I got back from my Prayers that it was time for me to step out on FAITH. So in the next Month you will see my vision come to reality at 25915 I-45 North Suite B Spring, Tx 77380.

Born in Mexico City, Patricia came to the United States at the age of six. He began cutting his own hair in high school and continued on through his college days.